Roger Harrison Lonsdale was born on 6 August 1934 and came from Hornsea.  He entered Hymers College in September 1945 in Form LIIIa, and left in July 1952.  At Hymers he had an exemplary career, becoming a full prefect (1951-52), having been Editor of The Hymerian (1950-2), Secretary of both the Music and Debating Societies, Under Officer of the Combined Cadet Force, Head of Brandesburton House, awarded the Woodhouse Essay Prize in 1951 and played in the First XI.  He left in July 1952.

The bedrock of these honours and the legacy of his life is a sequence of, principally, editions (magisterial, and profound in scholarship and insight) of 18th century authors: the Longman's Annotated English Poets edition of Gray, Collins and Goldsmith (1969); the New Oxford Book of 18th century verse (1984); an Anthology of 18th Century Women Poets (1989); and finally a magnificent edition of Johnson's Lives of the Poets (2006), which won several awards.  Preceding all these was a Life of the musicologist Charles Burney (1965), an intimate of many of the great literary figures of the 18th century.

He married first in 1964 Anne Mary Menzies, by whom he had one son and one daughter, and secondly in 1999 to Nicoletta Momigliano.

Such is the collegiate structure of Oxford that I only really encountered him at Faculty meetings, or when we examined together in the Final Honour School.  There he would contribute to discussion with authority and courtesy, qualities not always found together in the Oxford English Faculty.  I found he was an effective man to have on one's side.

No one exemplified better - and in abundance the Hymers College motto - 'High Merit, High Reward'! *

* I should like to record my gratitude for information to Emily Pennack, Hymers Development Manager, and Anne Askwith, Publications and Web Officer, Balliol College, Oxford.

The below 'In Memoriam' for Roger Lonsdale was written by Lorna Clark, for Burney Letter, the newsletter of the Burney Society, dedicated to the study of Frances Burney, her life and works (and those of her family), which they have kindly shared with us. 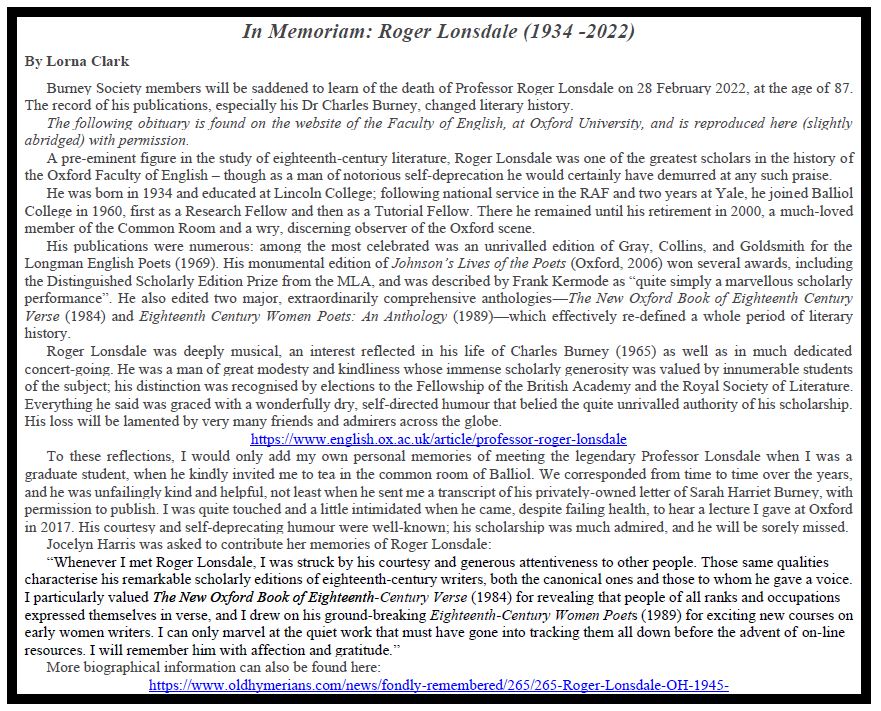 It is with great sadness that we annouce the death of Kiran Kamath, who attended Hymers be More...