Ian has continued to play the organ after leaving Hymers College 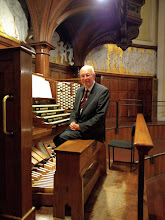 Since receiving our new organ, we have been contacted by Old Hymerians who remember fellow students playing the school organ in assemblies, as well as Mr O'Byrne.  One student was Ian Hare, so we found out what he has done since leaving Hymers College.

Ian Hare was educated at Hymers College (1961-68) and King’s College, Cambridge, where he was an organ scholar with Sir David Willcocks. After further studies in London and Paris, including with the international recitalist André Marchal, he was appointed as a Lecturer in Music at Lancaster University in 1974, later becoming the first University Organist. He has also held organist’s posts at Cartmel Priory, Carlisle Cathedral and Crosthwaite Church, Keswick, as well as directing the Lancaster Singers (which he founded), Cumbria Rural Choirs and Wigton Choral Society. He has performed in many parts of the world, particularly Europe and the USA, and has published several compositions.

He is the Director of Music at St. Oswald’s Church, Grasmere and of the Keswick Choral Society. In addition, he is an Honorary Fellow of Lancaster University, and Chairman of the Cumbrian Society of Organists, and has recently retired as an Examiner for the Associated Board of the Royal Schools of Music. His latest recording of Organs of the Lake District has been well received, and he was voted Cumbria Life Musician of the Year 2017.